Gartner predicts healthy growth for tech companies despite a market in decline. Is this true? Here’s what recent SaaS finance trends are saying.

The tech sector has been hit with wave after wave of unforeseen circumstances, ultimately resulting in a down market. New bookings are decreasing, ARR is in decline, and rising churn rates are causing finance leaders and CEOs to take a serious look at their current path to profitability. We are all asking questions such as

We have started to address these types of questions via a new forum we are calling “Expert Voices”.

Over the past month, we have held two dinners (one in San Francisco and one in NYC), where we invited a collection of industry influencers and SaaS finance leaders to join in a conversation about how they are balancing solving for growth or profit in these market conditions.

The idea for the conversation came from a debate we were having about the Rule of 40. Specifically, its applicability at different stages of a company’s growth. Over time this conversation has expanded to include other industry influencers like Ben Murray, the SaaS CFO, Ray Rike the Founder/CEO of RevOps Squared and David Spitz, once the Managing Director of KeyBanc Capital Markets and now the Founder/CEO of BenchSights.

We decided to broaden the conversation to include others from the industry and, voila, Expert Voices was born.

To help set the stage at the dinners, Todd Gardner, a former co-founder of SaaS Capital and currently the Managing Director of SaaS Advisors, and I teed up a conversation over dinner about the recent trends in SaaS Finance. Below I capture the big takeaways from the two sessions.

Todd started the conversation by setting some context about what is happening in the marketplace.

The average EV/LTM revenue multiples of public SaaS companies have seen a steep drop across the board from January ‘21 to now. However, high-growth companies have been especially hammered. While unicorn status and fast-paced growth used to warrant bragging rights, the growth at all costs business philosophy has caused “rocket ship” companies to face the consequences of their aggressive approach. 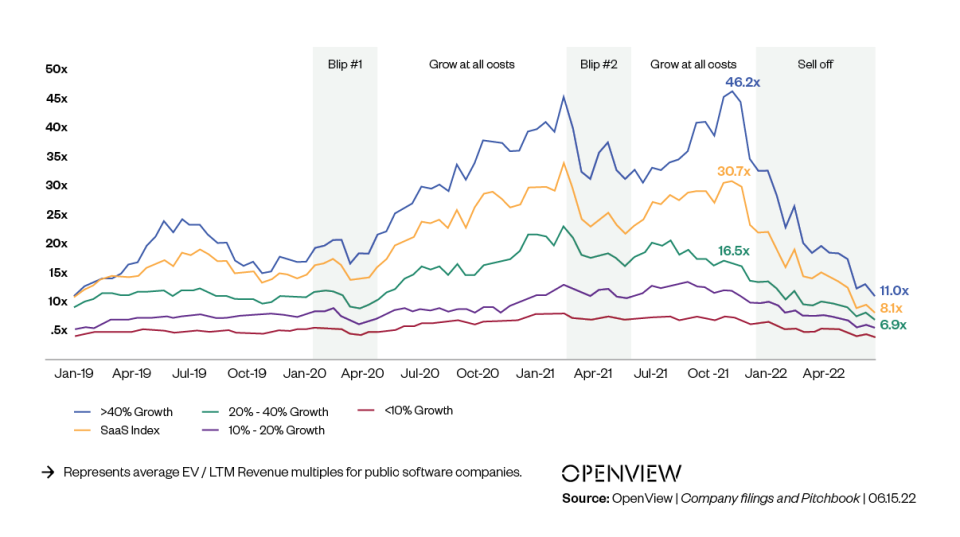 What does this mean for the private sector?

As influence trickles down into the private markets, series A, B, and C companies will also begin seeing a decrease in their valuations. In particular, talks among finance leaders have shown that many private companies are going so far as to decline new rounds of funding to avoid raising a down round and receiving a lower valuation.

While the total number of M&A deals are on par with recent years, the underlying narrative has shifted.

The typical reason for a merger or acquisition was to break into new markets, make a splashy exit, or expand product offerings. However, given the current volatile market, many struggling SaaS companies are putting themselves on sale out of necessity, and PE firms are pitching their smaller portfolio companies to recoup a loss or turn a profit. 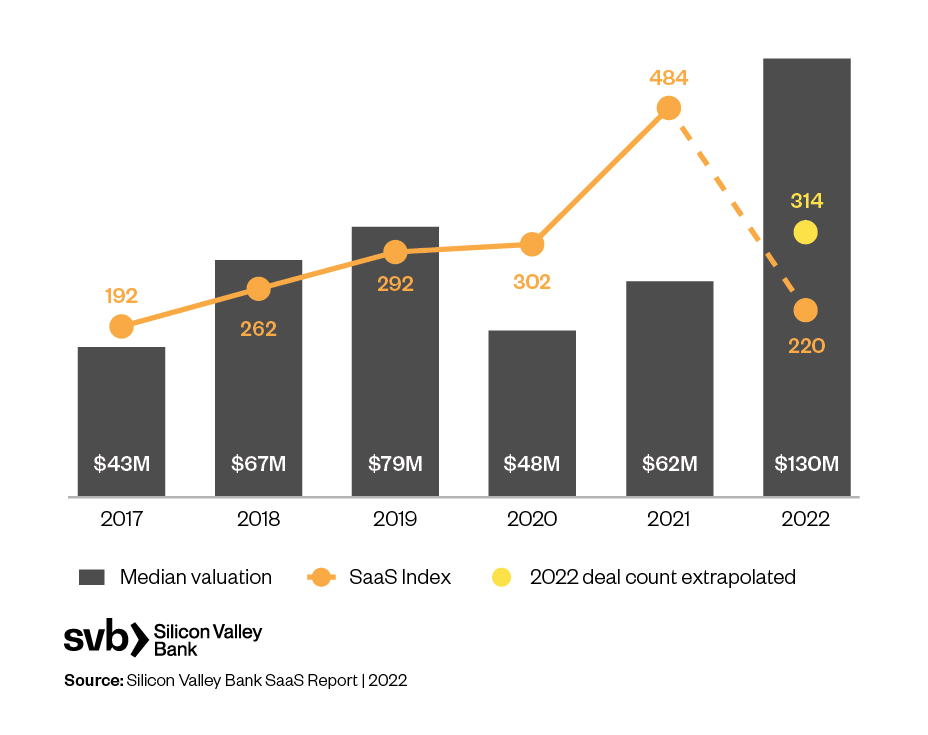 While these sentiments may not ring true for SaaS companies in the top quartile of growth, the same can’t be said for businesses that are in the middle of the growth bell curve.

For the average SaaS company, the new path to IPO is probably not as a standalone business, but as part of a larger entity. This shift in perspective means getting acquired is the goal that many finance leaders and VCs have in mind as they plan out their future financial roadmap.

In more extreme cases, GPs are actually handing capital back to their LPs. Unless a favorable investment opportunity presents itself, VC firms are giving the dry powder back to their investors to maintain relationships and capture future ROI instead of taking the risk of a premature investment.

Despite a market in decline, Gartner still predicts healthy growth 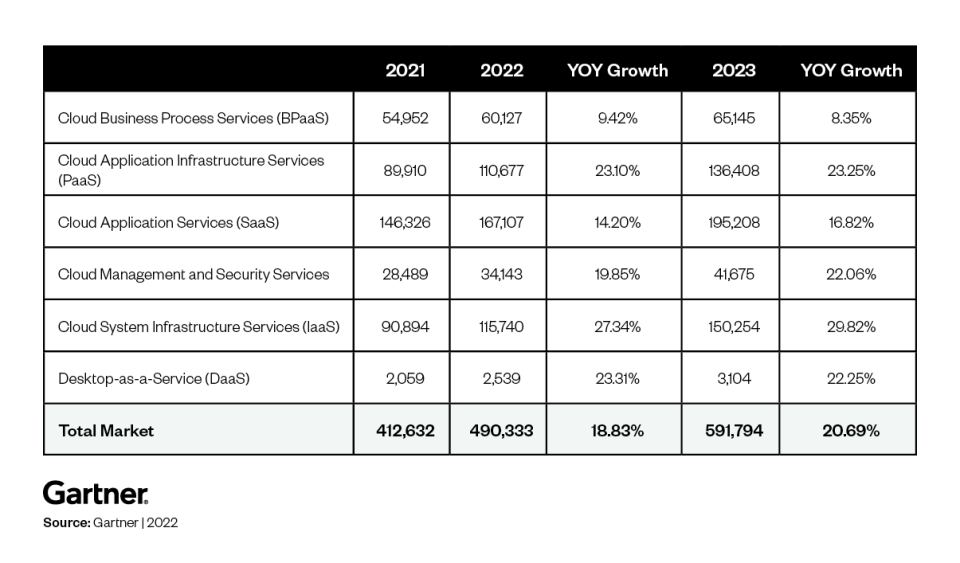 Oddly enough, Gartner still predicts healthy YoY growth in 2023 for many SaaS and technology companies. Though, many finance leaders (and skeptics) aren’t convinced, despite these published findings.

Some believe that these estimated growth rates are a lagging indicator and represent a disconnect between the capital markets and what’s actually going on in the economy. Instead, business leaders predict that Q1 and Q2 of 2023 are going to be fraught with churn as more annual contracts get brought up for renewal at the end of the fiscal year.

We then moved to talk about how the down market is affecting the SaaS industry at large.

How is the down market affecting SaaS buying behavior?

Modern businesses run on software, so it’s safe to say that there won’t be a complete freeze in new logo acquisition… right? Here’s how finance experts expect buyer behavior to change:

Valuations are now heavily correlated with the Rule of 40 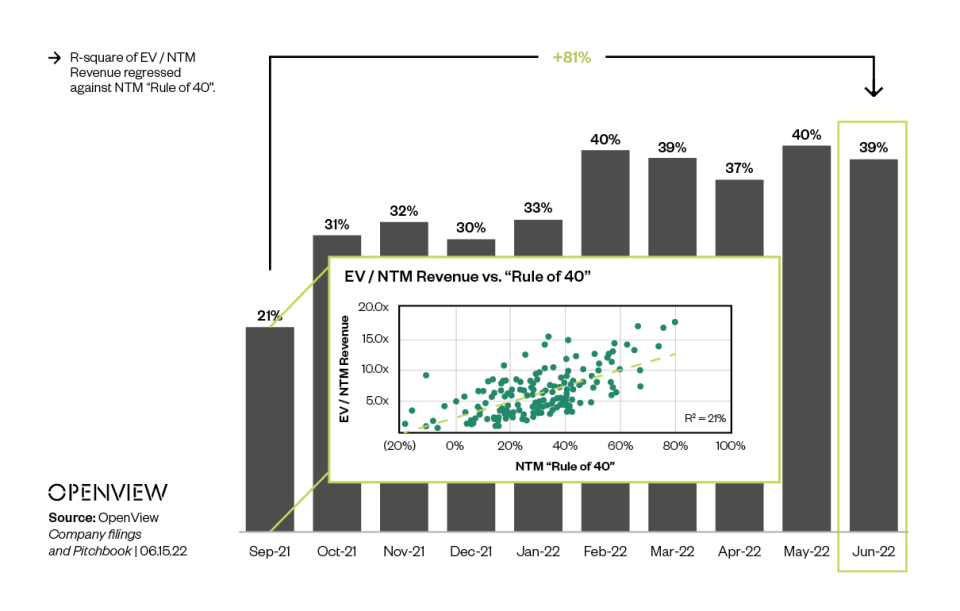 Valuation Explained by Rule of 40 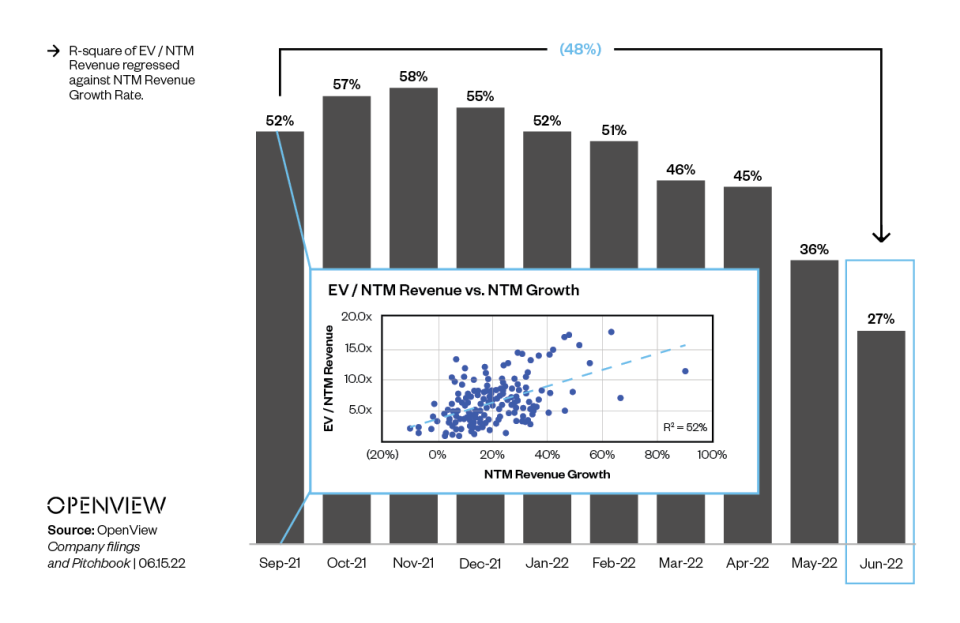 In previous years, the best way to find the value of a public company was to simply ask, “what’s it’s growth rate?” This has been true since SaaS began. Now, it’s no longer the key driver for valuations. The old “growth at all costs” mentality has been replaced by disciplined growth. Therefore, the Rule of 40 (growth rate + profit margin) is a better indicator of company valuations.

Specifically, an adjusted Rule of 40 is a favored metric by many SaaS finance leaders. In this instance, companies are measuring 70% growth against 30% profit vs. the standard 50/50 split. So while growth is still important, capital efficiency is carrying more weight than before.

Regardless of runway, everyone is cutting burn 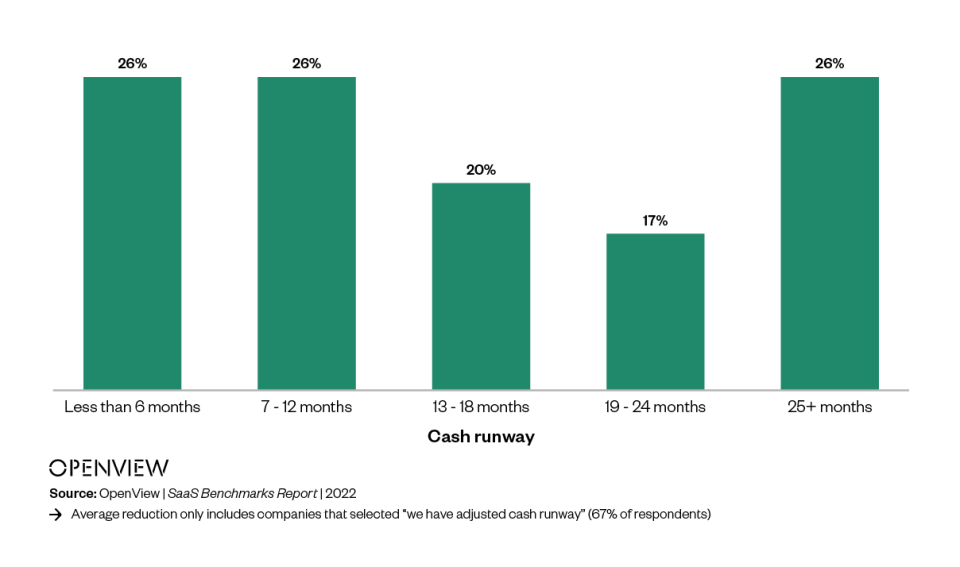 SaaS companies across the board are pulling back on spend, regardless of runway. As analysts continue to predict that markets won’t reach equilibrium until 2-3 years in the future, business leaders are working hard to make efficient use of the capital they have on hand.

At the dinners, we had lots of great interaction with the attendees and it is hard to capture all of their comments and insights. However, I know I came away with some new ideas to apply to Maxio and a great appreciation for the value that comes from getting a group of seasoned veterans together to talk about questions that don’t have easy answers.

At Maxio, our hope is to be one of those resources that you rely on as you navigate your own response to the rapidly changing market dynamics. To that end, we created a guide to help you navigate the market downturn unscathed. This guide is based on a bunch of Expert Voices–including pricing consultants, fractional CFOs, and SaaS veterans–whom we interviewed as part of producing the report.

Get the full Scaling During a Recession Guide here.

We look forward to continuing the conversation with experts like you!

Why SaaS CEOs Should Obsess Over the Rule of 40

Drive Growth in a Down Market: Monetization Models that Help SaaS Brands Succeed

Scaling During a Recession: Winning Strategies for SaaS Leaders

In this playbook, you’ll learn how pricing consultants, fractional CFO’s, and SaaS veterans recommend you adapt to keep winning—even in a volatile market.